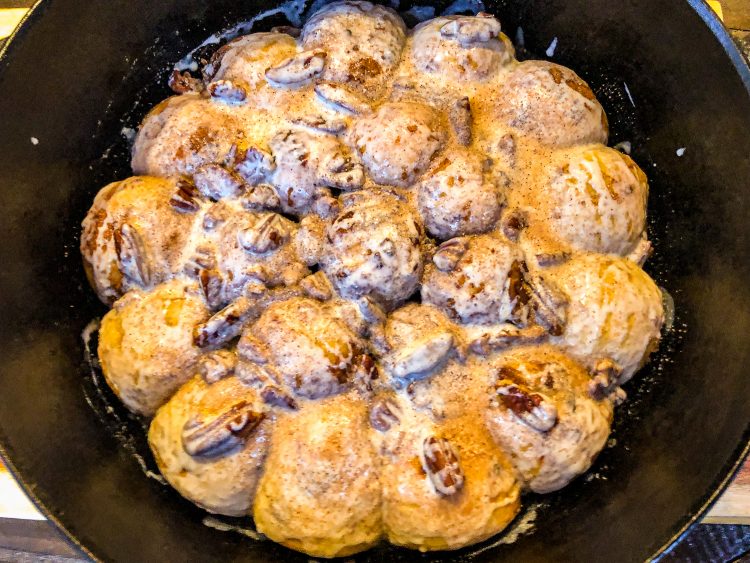 Easy and delicious Dutch Oven Cinnamon Rolls have the ooey-gooey classic flavor you love, whether camping or at home.

This post has been updated from its original May 16, 2017 publishing with new photography, content, and clarified recipe card.

Disclaimer, just so you don’t get mad at me later!

These are addictively delicious! And dripping with the most amazing cinnamon-sugar frosting mixture.

Now that the warning or disclaimer is out of the way, these Dutch Oven Cinnamon Rolls are not a tradition cinnamon roll. You know the swirling bread with a layer of cinnamon-sugar between it’s fluffy layers.

Our version is a riff on those, created for a tasty dessert or sweet breakfast while camping.

We wanted that classic taste we all know and love, but something much simpler while cooking outdoors.

Turns out, these are so amazing, I might not ever make them in the traditional way again…you might not either.

These cinnamon holes, which is what they really are, are really easy to make, but they do require a bit of forethought.

We use frozen dinner rolls. Yes you read that right. Frozen Dinner Rolls. NOT frozen cinnamon rolls (although, we’ve done that once and they’re delicious too.)

Depending on how warm your kitchen or campsite is, the dough needs to sit in the Dutch oven (or skillet) for 2-3 hours to rise.

Use about a tablespoon of softened butter to coat the inside of the DO or skillet. I like to be generous since removing them is easier the more it’s coated and the extra butter just helps with the their richness.

Place the frozen dough balls in, however you can make them fit.

However, the more space you leave them, the bigger and fluffier they’ll bake up. Our regular 6 quart DO and 12-inch skillet can fit between 21-24 frozen dough balls.

The smallest package of rolls I could find was 36, so perhaps you want to make a double batch or just toss the rest back in the freezer for another use.

Top the dough with brown sugar, taking a bit of care to get it in the nooks and crannies between the rolls.

Then sprinkle the cinnamon over the brown sugar.

And finally, if you’re using pecans, spread them over the top as well.

Once they’re all arranged and topped, cover them with either the DO or skillet lid or a kitchen towel. Allow them to sit out and rise. They will increase in size as they thaw.

The more space they have to expand, the more room they’ll take…much like a child or pet who crawls into your bed at night.

Insert the Jeopardy music while they rise over the next 2-3 hours.

Pre-heat your oven to 350°F about 10 minutes or however long your oven takes to heat up, before you want to bake them.

If cooking over coals, prepare them in advance, so it’s ready to go when you are.

Cover with the Dutch oven with its lid or foil and bake for 20 minutes. They could take up to 30, depending on your oven or coals consistency and how well you packed the pan.

Once they’re fully baked, remove them from the oven or coals and let sit. WITHOUT opening the lid or foil.

While they’re resting, slightly warm the pre-made cream cheese frosting. Once it’s warm, stir in the cream to thin it.

Drizzle the icing over the top of the still HOT cinnamon rolls.

If you want to be really decadent, you can sprinkle a bit of cinnamon-sugar blend over the drizzled icing. But this isn’t necessary to fully enjoy this delectable treat.

Serve (with a lot of napkins) and enjoy. 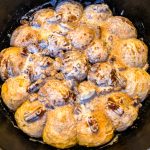 Cooler temperatures, either indoors or outside for camp cooking, will cause the rolls longer to rise, about 3 hours.  Over-crowding the pan will yield smaller cooked rolls, the more room they have to expand, the fluffier they will get.  Cube butter into small squares and place over the top of the rolls to melt while cooking over coals.

If you love these quick and easy Dutch Oven Cinnamon rolls, then you just might these other sweet treats pulling double duty as a breakfast (or snack) and dessert.