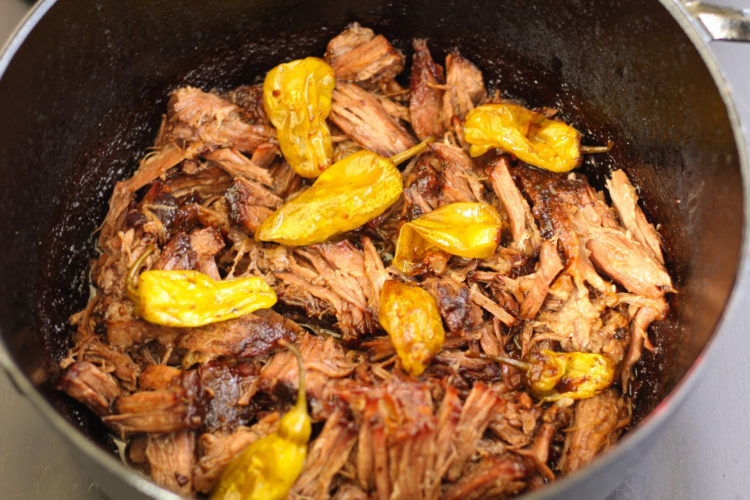 What is Mississippi Pot Roast?

If you’re like anyone else who has come across this recipe, you’re probably wondering what it is and why it’s called that.

Well, a Mississippi pot is one of the easiest pot roast recipes ever. You toss in 5 simple ingredients, put it in the oven, and a few hours later, dinner is done.

Why is it called Mississippi Roast?

Like everyone else, I have been super curious about why this roast is given the moniker Mississippi.

I assumed someone from Mississippi developed it and made it for someone who wasn’t from Mississippi. Then that person gave it the name to differentiate it from the classic Sunday pot roast.

Turns out I wasn’t too far off the mark. A woman by the name of Robin Chapman from Ripley, MS. adapted a roast her aunt was ‘famous’ in the family for. Voila, a new recipe was created.

That last ‘other’ was a blogger and now the recipe is one of the most famous pot roast recipes ever. You can read about it in detail here in the New York Times.

What is in a Mississippi Pot Roast?

To make this recipe, you only need 5 ingredients:

That’s it. Technically I used some salt and pepper, making it 7 ingredients, and a little oil for searing makes it 8.

What cut of meat is best for a pot roast?

There are a lot of cuts of beef to choose from when at the grocery store, it’s hard to know what kind to buy.

Chuck roast is the best cut of beef to make a pot roast. It has incredible marbling that slowly renders away producing a juicy meal. When reading the labels, if you see the word chuck, that’s the one you want. Unfortunately, there are so many combination of names with chuck. There isn’t an industry standard on these things.

For as long as pot roasts have been made, they’ve been made in Dutch ovens. For me, there isn’t any other way to make one.

What to Serve with Pot Roast?

The classic pot roast has onions, carrots, and potatoes cooked right in with the meat. But this Mississippi roast doesn’t.

You can add the traditional pot roast ingredients of carrots, onions, and potatoes, but honestly, I love serving it over mashed potatoes.

Making a Pot Roast in the Dutch Oven

Here’s step by step directions on how to make Dutch Oven Mississippi Roast.

First off, pre-heat your oven.

Liberally season both sides of the chuck roast with salt and pepper. Honestly, I always season with granulated garlic too, it’s habit and won’t hurt, but I didn’t do that this time.

Sear each side of the roast for at least 2-3 minutes. You really want to get a nice browning on each side.

Searing the roast can be skipped if you’re in a hurry. It won’t ruin the recipe. Searing or browning only enhances the flavor.

You want to achieve a deep browning on your roast. Now it’s ready to be turned into the famous Mississippi Pot Roast.

Evenly spread the the pack of Au Jus mix over the roast.

Spread the Ranch dressing/dip mix over the Au Jus mix on the roast. Try to get it as even as possible.

Cube the stick of butter and place it on top of the seasonings. Add the desired amount of peperoncinis. Use at least 3, but add as many as you like. Then pour 1/4 cup of the liquid in the pepper jar over the roast.

If your oven hasn’t been calibrated lately or your roast is on the smaller side, check for doneness at 5-6 hours. Each oven and each roast size varies. More marbling i.e. less meat could cook quicker.

All cooked and ready to serve.

This post has been updated from its original earlier publishing with new text, clarified recipe card, and photography. 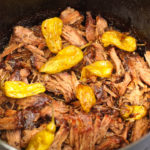 Notes on making Mississippi pot roast in the Dutch Oven

I used salted butter, but use unsalted to decrease the salt content.  The butter can be omitted.  If oven cooks hotter, check doneness after 6 hours. If concerned about the spice level, decrease brine to ⅛ cup and use ⅛ cup of water. If roast is smaller than 3 lbs. check for doneness after 5 hours using a thermometer.