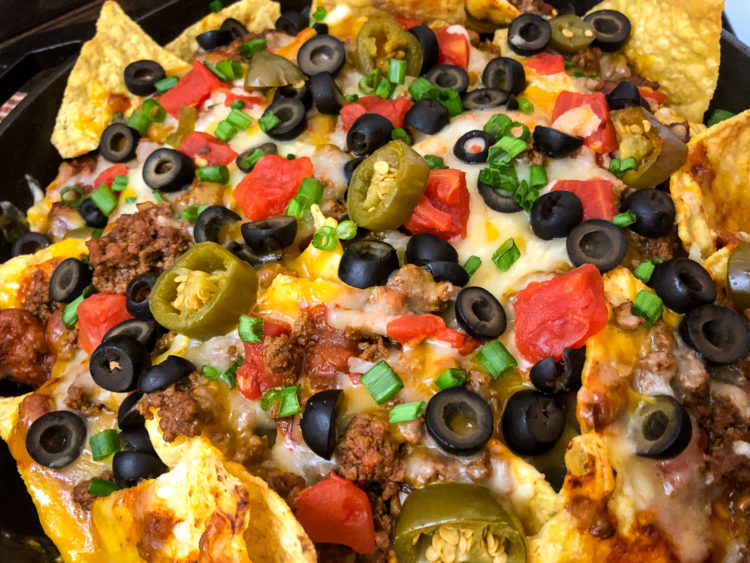 Either as a loaded appetizer or a main dish, these Easy Skillet Nachos are crowd-pleasing every time and totally customizable.

Nachos are considered a Tex-Mex appetizer.

The basic components are corn tortilla chips, cheese, and pickled jalapeños. However, any and everything can be added like beef, chicken, pork, olives. tomatoes, onions, cilantro, and so on.

Where did nachos originate?

Nachos originate in Northern Mexico. The story goes that a man named Ignacio Anaya created them out of necessity one day by frying fresh triangular-cut tortillas.

He then layered them with cheese and pickled jalapeños. He served them to his restaurant guests who absolutely loved them.

From there they grew in popularity and the rest is history.

Are nachos and tortilla chips the same thing?

Tortilla chips are the essential ingredient and base for making nachos.

How to make easy skillet nachos

Nachos can come together really quickly. Grate the cheeses and slice anything needing slicing like tomatoes and green onions.

I found it easier to buy already sliced olives and jalapeños. I am a fan of short cuts. But I do not recommend buying pre-shredded cheeses. The anti-caking agent used on that leaves a funny taste once heated.

Brown the ground beef, draining off any rendering then add the taco seasoning packet. Water is needed, but each packet is different. Follow your packet’s directions.

Once the beef is now taco meat, remove it from the skillet and set it aside. This is a one-pan meals, so I just wipe the cast iron out and assemble the nachos.

Side note: If you’re not a fan of packet taco seasonings, feel free to use a homemade blend. Here’s a recipe from my gal-pal Michelle over at The Complete Savorist. See the recipe notes below on using a homemade blend like hers.

Spoon over about of the chili, getting is as evenly spread out as possible, then repeat with the taco meat.

Don’t want to use canned chili, please use your favorite homemade chili like my Awesome Chili

Sprinkle half of both of the cheeses. You can do this in layers or you can mix them. No hard and fast rule with this. Heck, add three types of cheeses if you like. This is a judgement-free zone friends.

Take care to work some of the shreds around the edges where there might not be any meat. This will give some melted cheese to those bites instead of plain chips.

Now to the fun part!

Sprinkle around the tomatoes, olives, jalapeños, and green onions. I usually only use the white parts on this bottom layer, but sometimes I just don’t care.

Confession: I totes forgot to buy fresh tomatoes when I ran to the store. This being January in Utah, fresh, home grown don’t exist.

So when I realized I forgot and loathed the idea of running back up to the store, I improvised with draining canned tomatoes. Worked like a peach!

Pro-tip: Have someone who hates one of the ingredients?

Segment the nachos leaving a section free of the offending ingredient. That way they don’t have to pick it off and waste it. Or worse, that ingredient doesn’t leave its essence behind contaminating the bite for the eater.

Now we start all over again. Add the remaining corn tortilla chips over all the goodies in the cast iron skillet.

Spoon over the remaining chili and taco meat. Remember to take care to fill in those nooks and crannies. Nobody likes a plain chip when their after a bite of nacho.

Sprinkle the remaining cheeses as evenly as possible.

Then add the remaining everything, all the tomatoes, olives, jalapeños, and green onions. I do save a few of the green onions for garnish after it comes out of the oven. The cooked and raw onions have different tastes and I like both.

Pop the skillet in the oven and bake for 7-10 minutes or until everything has warmed through and the cheese is all melted. Serve with sour cream, your favorite salsa, and enjoy these easy skillet nachos.

This recipe is labeled for 4 servings as a main dish, however, as an appetizer it can serve 6-8.

The olives, tomatoes, and jalapeños can be added after baking, if desired.  Canned diced tomatoes that have been fully drained can be substituted for fresh tomatoes, if desired.  Refried beans can be substituted for canned chili. Homemade taco seasoning can be used. If so, add up to 2 tbsp. of the homemade mixture, ¾-1 cup water. I have found ½ cup tomato sauce with ¼ cup water really gives the meat a lovely depth of flavor.

This post has been updated from its original May 2, 2017 publishing with new photographs, content, and updated recipe card. This recipe was inspired by and adapted from I Wash, You Dry.