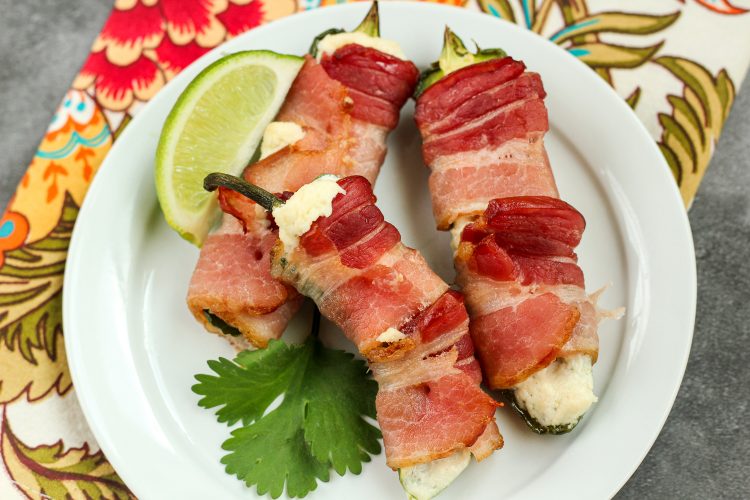 This post has been updated from its original December 31, 2017 publishing with new content, photographs, and updated recipe card.

If you loved our Cast Iron Bacon Wrapped Pickles, then you’re going to love these bacon wrapped jalapeño poppers.

What is a jalapeño popper?

What it is, is delicious.

But in all seriousness, a jalapeño popper is a jalapeño pepper that’s been sliced in half, seeds and veins removed, stuffed with seasoned cream cheese and baked.

In this particular recipe, we wrap them in bacon, but that’s just an extra touch we had to have.

Some recipes bread and deep fry them. And we can’t say we blame them. They’re delicious too.

How to make jalapeño poppers?

When shopping for the peppers, look for those with long stems. They really add a fun flourish when plated.

Since we’re wrapping these in bacon, using peppers with a minor ding or dent is just fine.

Clean and pat dry the jalapeños.

Slice them in half lengthwise. If you’ve got the knife skills, try to slice the stem in half as well. They look just wee bit sexier when the stem is still attached.

Scoop out the seeds and veins.

I recommend setting the cream cheese out a few hours before you want to make the recipe. The softer the cream cheese is, the easier it is to work with, especially getting it into the pepper boat.

Toss the block of cream cheese into a boil and using a fork, stir in the granulated garlic.

While we’re using a very basic filing, the possibilities are endless on how you can jazz up the creamy filling.

Here’s a few mix-in ideas, use one, use all.

Ah, now to the bacon!

Depending on how long the peppers are, you may want to cut the bacon in thirds like pictured above or just in half.

Grab a spoon and scoop some of the cream cheese filling and stuff each pepper.

Once they’re all stuffed, wrap the bacon around the pepper and secure with toothpicks.

I like to have the seam of the bacon on top, but there’s no wrong way to wrap a pepper.

Place them in the Dutch oven or skillet and toss them in the oven. Bake for about 35 minutes

if you want the bacon to crisp up, toss in under the broiler for a minute or two.

Let them cool for just a minute because no likes molten cheese and scorching bacon in their mouth.

We served these Dutch Oven Jalapeño Poppers with a homemade ranch dip from The Complete Savorist. 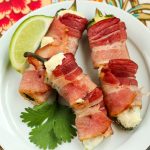