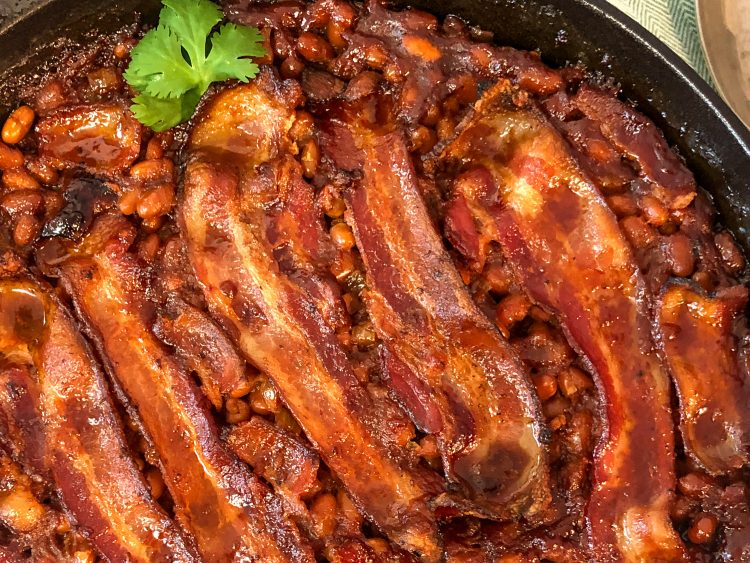 Skillet Baked Beans and Bacon are the traditional Southern style with molasses, topped with bacon strips, and baked in the oven in a cast iron skillet.

This post has been updated from its original June 15, 2018 publishing with new content, photography, and recipe clarification.

There’s something about summer and baked beans. They pretty much go hand and hand, especially if there’s some kind of gathering or holiday.

A quick web search for baked beans will yield more results than you could ever want.

Stove top. Oven baked. Slow cooker. Electric pressure cooker. You name it, you can find a recipe for it.

But there’s one type of baked beans that stand out, in my most humble opinion, than all other baked bean recipes: Southern style baked beans.

What are Southern Style Baked Beans.

The difference in Southern style is the use of molasses as a sweetener. It’s usually paired with dark brown sugar.

The bacon is also laid in strips across the top of the beans instead of chopped and mixed in.

Of course, each Southern cook will have their own special ingredient or secret tweak, but here at Dutch Oven Daddy, we’ve kept it simple and old school; that’s just how we roll.

How to make Bacon Baked Beans in the skillet

Mix up all the sauce ingredients and set that aside.

Dice the onion then set those aside.

Heat up the oven and the skillet on the stove top.

Partially cook the bacon in the hot skillet. You don’t want to fully cook it, it’s going to do that while baking in the oven.

The whole strips of bacon won’t fit across the top of the beans; they’ll need to be cut to fit. You can do this beforehand or after.

If you cut the bacon beforehand, don’t forget to factor in shrinkage. Nobody likes shrinkage.

Sauté the diced onions in the bacon renderings. They only need to be softened, not fully cooked. Drain off any residual renderings.

What type of canned beans are best for baked beans?

While no one would argue that making anything from scratch is better, sometimes, modern food conveniences are just that, conveniences.

Canned beans are a wonderful thing to have on hand for quick and easy, protein-rich meals. When it comes to baked beans, canned are definitely a great way to go.

But not all canned beans are created equal.

For baked beans, the base should be pork and beans in tomato sauce.

And honestly, we absolutely love Van Camp’s-they’re not paying us to say that. They have the best flavor.

Just be sure to check your label, you don’t want to pick up canned baked beans. Those already are seasoned and flavored.

Stir in the pork and beans to the onions in skillet.

Then mix in the sauce. Canned beans are tender, so be sure to be gentle with them. Nobody likes a big ole pot of broken, smashed beans.

Lay the bacon on top of the beans in the skillet. Fill any holes or gaps with pieces since not all the strips will fit evenly across.

Unfortunately, there still maybe a bit more shrinkage while in the oven.

Toss the skillet in the oven and bake for about an hour.

Once they’re done, let the skillet cool down a bit if serving straight from it, otherwise, transfer to a serving bowl or platter, replacing the bacon strips for presentation.

What to serve with baked beans?

Make it a meal. Here are some delicious recipes to serve with these delectable beans:

Drain off some of the excess liquid for beans so that the final dish comes together tighter. There will be some evaporation in the oven.  Use canned pork and beans in tomato sauce, NOT canned baked beans. We love and only use Van Camp’s.