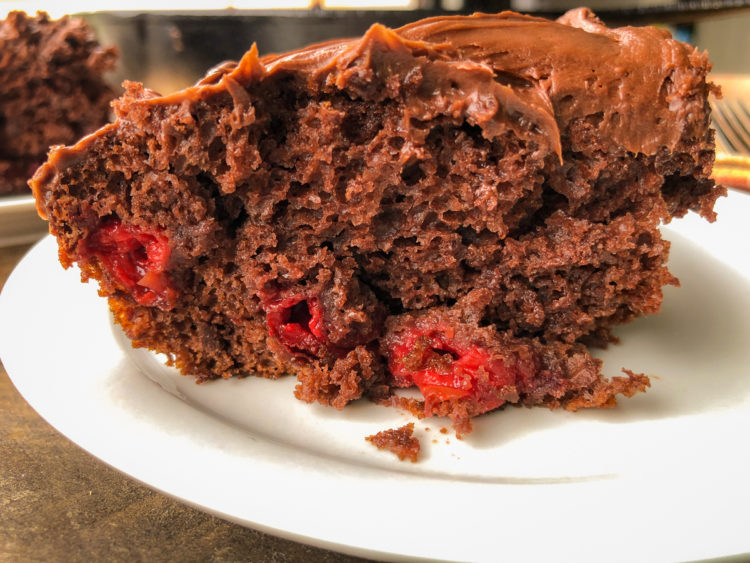 It may look like an unusual cake recipe, but this Skillet Chocolate Cherry Cake will be an absolute hit with your family and friends.

This is not my recipe. This is a rather popular cake recipe from a 1974 Pillsbury bake off contest.

The ingredients, or lack there of, for this cake may strike some as odd, but I promise it is delicious. After all, it did win a contest nearly 45 years ago.

The lack of liquid, both water and oil that you’re accustomed to using in cakes is missing, but the cherry pie filling will make this cake moist and delicious.

I used three eggs, for a more fluffy texture, but the original recipe only uses two. It’s a bit chewier with two. I love it both ways.

Can You Bake in Cast Iron?

Cast iron is versatile inasmuch as it can from the stovetop right into the oven or vice versa. So there is no reason not to utilize this kitchen workhorse for baking as well.

Cast iron is also known for its even heating properties, making it ideal for all your baked goods, but only once it’s been pre-heated

Tips for Baking with Cast Iron.

Just as with all your favorite dinner recipes, using your cast iron for baking is wonderful.

Cast iron takes a bit of time to heat up properly and doesn’t do so evenly. However, once it is hot, it cooks evenly.

Pre-heating your cast iron before baking is just as important as it is for any other recipe.

It’s best to heat it gradually. When you are pre-heating your oven for baking, toss your cast iron it and allow it to come to heat with the oven. Just be careful to use oven mitts and trivets when dealing with a hot skillet.

If you’re using an heirloom piece, it might be fully seasoned to be non-stick. Perhaps you’re using a newer, pre-seasoned item, it might not have the full non-stick properties as older pieces.

When making baked goods, I still use cooking spray to ensure easy removal, particularly when I want to present the baked good outside my cast iron.

How to Make Chocolate Cherry Cake in a Skillet.

Add the cake mix to your favorite bowl, like my lovely pink one here. Add the almond extract and eggs.

I break up the eggs by starting to stir them into the dry cake mix. It will be too dry to completely incorporate, but at least the yolks will break.

Gently fold in half of the cherry pie filling. It’s really easy to break the cherries apart, so I begin with just half the can. Once it resembles batter, fold in the remaining half of cherries.

Using an electric mixer is not recommended for this cake recipe. The cherries are delicate and will be complete decimated if one is used.

There’s nothing more tasty than getting a full cherry in a bite of this scrumptious cake.

Once it’s all incorporated, the batter will look rather thick, but don’t despair, it will turn out fluffy.

Pour it into your cast iron skillet that has been sprayed with cooking spray. Despite our iron being well seasoned, cake can still stick if not well lubricated. You can use your favorite cooking oil instead of cooking spray.

Pop it into a pre-heated 350° oven and bake for 30 minutes or until a toothpick comes out clean. Once baked, allow it to cool for at least 15 minutes before frosting.

Frost with your favorite canned frosting or even homemade. Slice and serve.

Here are some other delicious desserts made in cast iron. 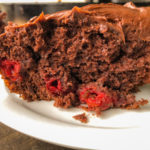 This post has been updated from its original publishing with new content, clarified recipe directions, and photography.