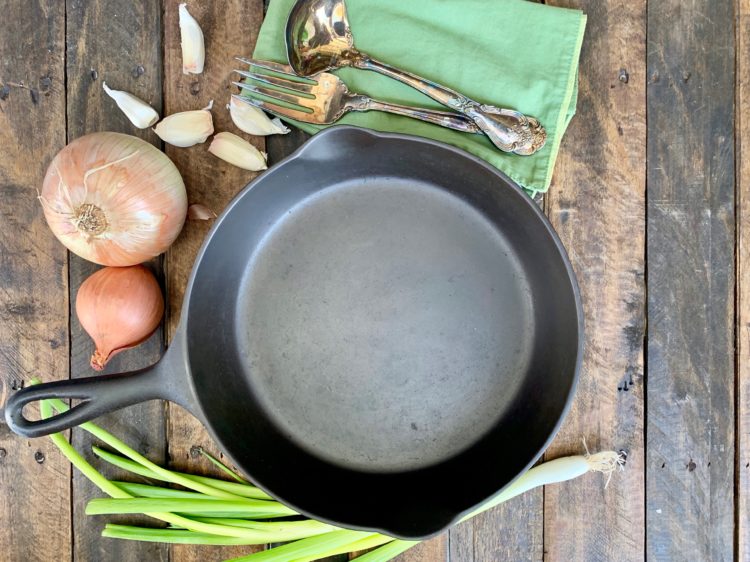 What is cast iron seasoning?

Cast iron seasoning is the process of heating a small amount of oil on your cast iron until the oil reaches above the smoke point after which polymerization and carbonization occurs.

Why is my cast iron skillet sticky after seasoning?

If your skillet comes out sticky after seasoning it usually means that you have too much oil on the skillet and it hasn’t completely polymerized. No need to worry! Your skillet hasn’t been ruined. You can restore the cast iron skillet using the Oven Cleaner Method.

Why is my cast iron skillet spotty after seasoning?

Again, you have slightly too much oil on your skillet. Make sure to wipe the oil out of the cast iron to the point where it almost looks dry. No matter how much you think you wipe out it’s not likely you will be able to wipe out all of the oil that was applied. My rule is to wipe out the oil until you think you have wiped it all out, then wipe it out one more time.

Why does the seasoning flake off of my cast iron?

Some oils are better than others to season with. Certain oils, when used at the incorrect temperature, will cause flaking. If the oil has too low of a smoke point it will have a large affect on flaking. I have seen flaking primarily with flaxseed oil. My general rule of thumb is to redo the seasoning when this happens and start over getting a good, first base layer.

What is the best oil to use to season my cast iron?

How to season a Dutch Oven?

Seasoning a Dutch Oven is done in the exact same way as any other cast iron that you may own. BuzzyWaxx is my go-to seasoning oil for both types of cast iron. Follow these easy steps below to get that Dutch Oven in tip top shape.

How do I season using BuzzyWaxx?

Preheat your cast iron in the oven to 200-350 degrees F (93-177 C), this should only take about twenty minutes. That will be enough time to heat the cast iron up for melting the BuzzyWaxx. Please note, this stage will not make your cast iron too hot to handle. You can still hold it with an oven mitt or pot rag.

If you’re using the BuzzyWaxx metal can, just rub some on a rag using a circular motion, then wipe it on your cast iron and follow the exact same steps! Any rag will do, no need to purchase competitors “soaked rag”, you’ll be making your own using either of our product’s packaging. Save yourself some money! Use the same rag over and over!

Place your cast iron back in the oven upside down for one hour at 480-500 degrees F (250-260 C). This will allow for polymerization of BuzzyWaxx for seasoning to occur. When the time is up, simply allow it to cool down enough to repeat the process of melting on the BuzzyWaxx, wiping it off leaving a thin layer and back in the oven! Three applications will be enough and you’re ready to cook! You can also use it after cooking and washing your cast iron. After you wash and dry your skillet, place it back on a burner on low heat. Rub some BuzzyWaxx on the cooking surface and wipe it around covering the surface. This will keep your pans nice and slick, always ready to cook!