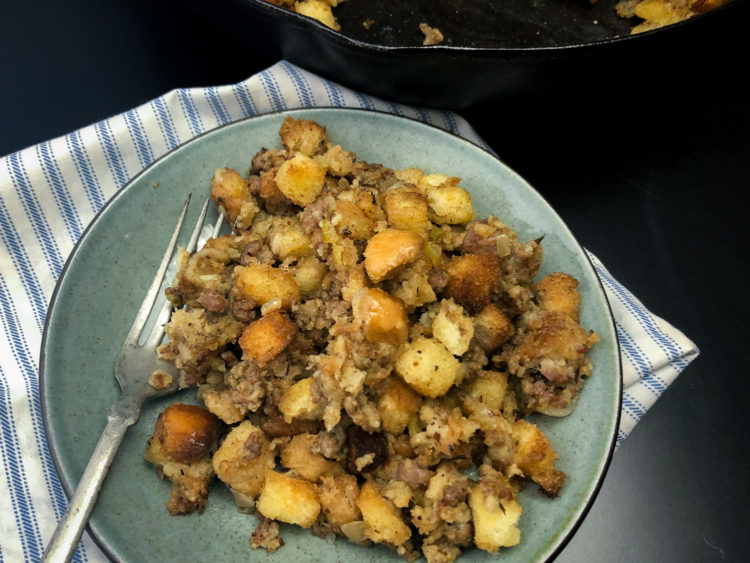 Skillet Sausage Stuffing goes from simple ingredients to crowd pleasing holiday deliciousness in about 30 minutes all in your favorite cast iron skillet.

Don’t want to stuff your bird this year? No problem.

This is my family’s traditional homemade sausage stuffing that we adapted for a 12″ cast iron skillet. Technically, it’s a dressing, not a stuffing, since we’re not stuffing it in the bird…but semantics.

Can I make stuffing the day before Thanksgiving?

If you’re looking to lighten the load on Thanksgiving, cooking some dishes ahead of time is an excellent idea. This skillet sausage stuffing is one you can make a day or even two, ahead of time.

This dressing recipe pre-cooks all the raw ingredients before it’s assembled, making it perfectly safe to store properly in the refrigerator until cooking time.

However, do not store it in the cast iron skillet. Place it in a sealed container.

Our Dutch Oven Honey Glazed Carrots is another recipe that can be made ahead and rewarmed on the big day.

Prep your ingredients and read through the entire recipe card before beginning.

Once the skillet is piping hot, crumble in the sage sausage. You can use regular pork sausage if you want, but increase the amount of herbs and seasoning when assembling the dressing. We highly recommend the sage sausage though.

Once the sausage has been transferred, toss in the three sticks of butter (yes 3). As they melt in what can only be described as culinary ecstasy, toss in the onions and celery.

Once the onions and celery have softened, about 5 minutes or so, add the sausage back to the skillet and mix well.

The mixture will be utterly tantalizing swimming in that luscious pool of butter, but only sample a bite or two. It’s far to easy to over-taste-test and you could end up without enough mixture for the stuffing.

Rotate stirring in the bread and broth until all the bread has been incorporated and it’s desired moisture. You want it to be moist (sorry if you hate that word) but not soggy.

Cover and toss it in the oven to bake.

Here are several more recipes from my blogger colleagues to help complete your holiday table.

Make sure to check out all the awesome Holiday Side Dishes: 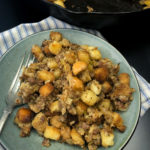 Water can be substituted for broth. White wine can be used as well as PART of the liquid need, not all.  The amount of actual liquid used to make this (or any stuffing/dressing) varies. This recipe and its written proportions should not exceed 4 cups of liquid. It will probably be closer to 2½, but I erred on the side of caution by stating 29 oz. needed.

This post has been updated from it’s original December 11, 2017 publishing with new content, photography, clarified recipe card, and links to other recipes.